To share your memory on the wall of Bettye Schroerlucke, sign in using one of the following options:

Provide comfort for the family of Bettye Schroerlucke with a meaningful gesture of sympathy.

To send flowers to the family or plant a tree in memory of Bettye Jean Schroerlucke (Everley), please visit our Heartfelt Sympathies Store.

Receive notifications about information and event scheduling for Bettye

We encourage you to share your most beloved memories of Bettye here, so that the family and other loved ones can always see it. You can upload cherished photographs, or share your favorite stories, and can even comment on those shared by others.

Posted Jan 19, 2019 at 03:26pm
Dear Gil, Kathy and family,
I am so happy that I was able to be Bettye's next door neighbor and friend. What a wonderful, strong, delightful woman. I'll miss her company but I'll keep company with her spirit and memory. Bettye and your family are blessed and have been and will be a blessing to so many. Our Wesley Manor Patio Home family will be here with you and for you as you learn to carry on with life.
Much love,
Donna Woods
Comment Share
Share via:
G

Posted Jan 13, 2019 at 01:49am
Dear family, I am sorry for the death of your dear loved one. Death is certainly an enemy that take those we love, young or old. Jesus Christ promised to call all those in the memorial tombs, they will hear his voice and come out. (John 5:28 & 29) Yes, the resurrection will be a reality on a peaceful earth. (Psalm 37:29, Acts 24:15)
Comment Share
Share via:
AK

The two of you are amazing women in part because she was. Thinking of you as you grieve this immense loss.

Kyli purchased the The FTD Cherished Friend Bouquet for the family of Bettye Schroerlucke. Send Flowers

Posted Jan 11, 2019 at 04:48pm
Dear Gil and family,
We send our deepest sympathy to each of you. Bettye's love for all of you was evident, but especially her love for Gilbert. You are in our hearts and in our thoughts, dear friends.
Peace and Much Love,
Cathy & Frank Ward
Comment Share
Share via: 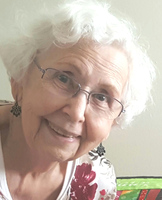