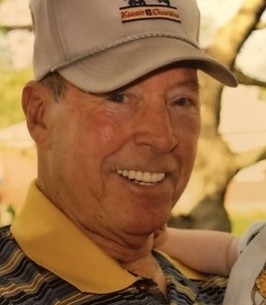 Print
Cornelius “’Buddy” Demling, “The King of Clubs”, of Louisville passed away on October 31, 2018.

Buddy was born in 1936; the second of eight children born to late Cornelius and Helen (Niehoff) Demling.
A PGA Professional Since 1953, Buddy’s passion for golf began at age 10 when he became a caddy for Charlie Vettiner and developed a love for the game. By age 15 Buddy was working in the pro shop at Standard Country Club, which later became River Road Country Club. He attended Flaget High School from 1950- 1954 where he was a fixture on the golf team. Before graduating high school, Buddy turned pro at age 17. He worked on the golf course and attended night classes at Bellarmine College where he earned a Bachelor’s degree in Business in 1961. While at Bellarmine, Buddy helped build the Par 3 golf course, taught in the Physical Education Department, and coached the golf team to five consecutive Intercollegiate Athletic Conference Championships. During that time he also played in three National PGA Championships.

In 1962, Buddy became the head golf pro at Chicago Heights Country Club in Chicago, IL. While in that role he also played the Caribbean and American Golf Tours. In 1964, he returned home to marry the beautiful love of his life, Sara Schnellenberger; they were married for 52 years. In that same year, Buddy began performing his world-famous trick-shot exhibitions.

While performing his famous trick-shot shows, Buddy also worked for Ford Motor Company from 1973-1978. He later worked for the Metro Parks, and then for the Courier Journal where he worked first in their Newspaper in Education Program and then in Promotions. He remained in that role until he retired.

Since 1980, Buddy was active in the Kosair Shrine, donating his time and talent to help with fundraising for this incredible organization. Buddy was committed to helping Kosair Kids in whatever way he could.

In his expansive career as a professional golfer, Buddy played in over 60 tournaments worldwide, performed over 1000 trick-shot exhibitions, won three Kentucky PGA Senior Opens, won two Kentucky PGA Championships, played in four British Senior Opens, and was a six-time Senior PGA Player of the Year. His two most prized professional accomplishments were being inducted into the Kentucky Golf Hall of Fame in 2006 and being inducted into the Kentucky Athletic Hall of Fame in 2010. While he was accomplished in his craft, for Buddy, golf was really his way of connecting with people, forming lasting relationships, helping others, and being a part of something bigger than himself.

Personally, Buddy was an incredible and involved father, a wonderful and generous friend, a caring uncle, a fantastic and entertaining golf buddy, and a top-notch, devoted grandad. He was proud parent and grandparent, and enjoyed the accomplishments of others much more than his own. Buddy was especially grateful for his recovery from the disease of alcoholism and his 36 years of sobriety. He was Catholic and a member of St. Edward Catholic Church for over 50 years. Buddy has made a difference in so many lives and he will be missed.

He was preceded in death by his parents; his brothers Tony and Joe; his cherished wife of 52 years Sara; and his beloved son, Jeffrey.

He is survived by his daughter, Jennifer Cebe (Jason); his wonderful grandson, Jeffrey Benjamin, whom he adored, and siblings, George “Moe” (Dee), Robert (Pam), Barbara, Mary (Dennis), and Patricia (Paul), and many nieces and nephews whom he loved.

Buddy’s family wishes to thank the doctors, nurses, aids, and staff at the Norton Audubon Cancer Institute who cared for him with astounding compassion and kindness during his final days.

Memorial donations may be made to Kosair Charities and Hosparus of Louisville.

To send flowers to the family of Cornelius "Buddy" Demling, please visit our Heartfelt Sympathies Store.

We encourage you to share any memorable photos or stories about Cornelius. All tributes placed on and purchased through this memorial website will remain on in perpetuity for future generations.

KS
We will all miss you so much . You were a great friend and a role model. From everybody at Southern Sports .
kristoff smith - Thursday November 01, 2018 via Condolence Message
Share This:
1
Page 1 of 1
Share
×