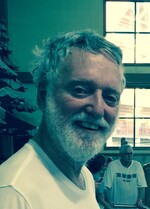 David Graham, 73 passed away on February 1, 2022 after a long and hard-fought battle with Parkinson’s.

David is survived by his wife, Carole, sons Sam Graham (Lisa) and Jack Graham (Kaelin), daughter Katie Nash (Mike), many other loving family members, his golf buddies, and his 7 grandchildren, who were the lights of his life (Charlie, Henry, Max, Miles, Vivian, Charlotte and Rose).

David was a self-made man. He started his own plumbing business, Graham’s Plumbing Company, from the ground-up in 1978, and ran the business with great success until his retirement. He taught himself how to invest and manage finances, and made sure that knowledge was passed on to his kids. He designed and built the home where he and Carole raised their kids.

He was an incredible dad. He coached all 3 of his kids in multiple sports throughout their lives, cheered them on in in their school and careers, gave sound and considerate advice when asked, and always showed up for them. From how to pop the top off the popcorn and how to throw a baseball the right way to how to be great plumbers (except for Katie because he did all her plumbing for her) and how to secretly fish off the side of the boat where your family is not swimming so they don’t know you are bringing the fish to them, he taught and gave them so much. There was never a moment’s doubt of how much he cared for and loved them or of how proud he was of them.

David was kind and caring, but also strong and tough. He was always into lifting weights and boxing (even later in life with his TKO Parkinson’s friends). David loved golf with such a passion that he would record himself hitting golf balls in the backyard so he could critique his own swing, and when his children were young, for punishment, he would sometimes make them watch golf on TV with him. His golfing buddies were his best friends, and he spoke very often and happily of them.

David was also Papa to 7 grandchildren, whom he loved with his whole heart. From his cannonball at Lake Cumberland to water slides at Great Wolf Lodge, he made his grandkids happy. He lit up around them, and the feeling was mutual, as evident in the kids’ chants of “Papa’s in the house” when he would come into a room, pumping his fists in the air.

Parkinson’s took a lot of things, but it also gave us many chances to express to him what he meant to us our whole lives and what he will always mean to us.

In lieu of flowers, please consider a donation to:
TKO Parkinson’s
2828 Klondike Ln.
Louisville, KY 40218
Or online at www.TKOParkinsons.com