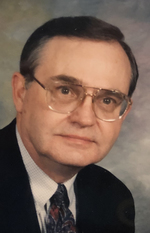 David Gerald Redmon, 79, passed away at home with family by his side on Thursday, June 6, 2019 to join his beloved wife Sue Anna.

David attended St. Francis of Assisi, St. X and Bellarmine. After retiring from Celanese Corp, he was instrumental in the formation of several business ventures including Spectrum Health Services. He served on numerous charitable boards including Ursuline/Sacred Heart and was a longtime member of St. Martha Catholic Church.
In addition to his wife Sue Anna, he is preceded in death by his parents, Carl and Jean Redmon and daughter, Donna Wheeler.

In lieu of flowers, expressions of sympathy may be made to Mass of the Air or his church.