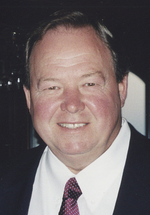 Donald R. Lenz Sr. died peacefully on Monday, July 1, 2019 at home surrounded by his wife and children. He was 77. He was born on June 11, 1942 to the late George W. Lenz Jr. and Annette Bywater Lenz.
After graduating Trinity High School in 1960 he began his career training as a machinist at The National Acme Co. in Cleveland, Ohio. After a few years of training he returned to Louisville to work with his father in the family business
Precision Tool, Die and Machine Company, eventually becoming the president and owner for over 30 years. He was well respected in the industry and sincerely cared for and appreciated the efforts of all his employees and business associates that helped make Precision a very successful company. He was also a past president of Big Springs Country Club for several years and most enjoyed playing golf and cards in the Men’s Grill with his many cherished friends over the years. He will be remembered as a loving husband, great father, proud grandfather, and a good friend to many.
Mr. Lenz is survived by his loving wife, Sally Schroering Lenz, his six children: Amy Hennessy, Lori Clark (Charles), Don Jr. Lenz (Leslie), James Lenz, Leslie Erena (Joseph), all of Louisville, KY and Jennifer Cuntz (David) of Durango, CO.
He also has eleven grandchildren: Kelli Moore (Sherrone), John Lenz, Hunt Lenz, Clayton Williamson (Ashley), Cassie Clark, Maggie Hennessy, Sean Hennessy (Ellen), Lindsey Wilburn, Allison Erena, Martin Cuntz, Ana Cuntz, and six adorable great grandchildren. He is also survived by his brother Kenneth Lenz. He was preceded in death by his parents, and his brothers G. William III and Gregory.
In lieu of visitation and flowers the family requests that expressions of sympathy be made to Hospice and Home of the Innocence.