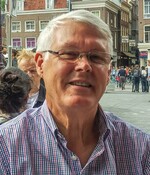 Douglas Michael Fenn passed away on Tuesday, February 23 at his home in Louisville, Kentucky.

Doug lived a very full life. He was a private man, but shared so much of what he enjoyed with family and close friends. He was blessed with a loving family and took great joy in welcoming every new generation. His face would light up with the silliest grins as he bounced the newest addition to the family on his knees. He most loved being “Pop-Pop” to granddaughter Harper.

He had many varied interests and loves; appreciating a wide range of art and music styles. He supported and encouraged individual artists, musicians and art-centered organizations. He was equally at home in the basement of a jazz club, concert music halls, local street art fairs and the art galleries at home and in Europe.

He embraced travel his entire life, from his youngest days traveling with his father to Europe for business through his middle years traveling to Europe with his first wife and dear friends, and with Liz, his traveling companion and partner in his later years. He loved everything about travel; planning months in advance so he and his fellow travelers would have the most memorable experiences. In his travels and at home, he loved to explore all there was to experience in foods and culture. From octopus in the tapas bars in Barcelona to duck sliders in Louisville, he relished it all. He enjoyed cooking and many nights would find him in the kitchen chopping and dicing for a new or favorite recipe. There was no such thing as too much garlic or sautéed onion in a dish. Baking cookies and making dinner with Harper was a treasured joy.

Doug took great pleasure from kayaking and hiking with Liz, his son, Chris, and friends. His favorite hikes were in the Smoky Mountains, Jefferson Memorial Forest, Bernheim Forest and the Big South Fork. He loved most to paddle the area waters and adjacent creeks of the Ohio, Kentucky and Cumberland rivers and the waters of Grayson Lake. He enjoyed the calm of the outdoors and the beauty of the natural world, a quality that he shared with his son and his wife Liz.

He was born in Tell City, Indiana on May 26, 1948 to Marjorie (Bruner) and Paul Fenn, the second child and first son of 5 siblings. While attending Tell City High School he greatly enjoyed playing basketball and often spoke of his respect for his coach. He received his bachelor’s degree from the University of Evansville. In college, Doug met his first love, Donna (Nix). Doug told many stories of working for his then future father-in-law, Chris Nix in building construction. Doug’s work ethic was such that he gave up the opportunity to hear Jimi Hendrix in concert in Evansville because he could not skip work nor lie to Mr. Nix. Doug and Donna were married in 1971 and welcomed their much loved son Chris, in 1978.

Doug worked his entire professional life in the family furniture manufacturing business, Tell City Chair Company. The company was founded in 1865 making double cane chairs and later producing a full range of wood furniture for the home. As the eldest son of the fourth generation of Fenn’s, Doug began work as a factory employee at the age of 15 and in 1989, he took the helm as President. As its leader, Doug was recognized as gracious and measured, qualities that would define him in business and in his personal life.

Doug spent the first 60 years of his life in his hometown where he gave to his community and industry as a business leader and volunteer. His many roles included chairman of United Way of Perry County, International Trade Ambassador for the State of Indiana, Board member for the Ohio Valley Chapter of the Forests Products Research Society, the Evansville Visiting Nurses Association, and the National Association of Furniture Manufacturers, where he also served for a term as president. In memory of his first wife, a school teacher, Doug created the Donna Fenn Literacy Fund which supports literacy initiatives for the local elementary school. In Louisville, Doug served many years as a Director for the Chamber Music Society of Louisville.

After the death of his first wife, Doug found love again with Elizabeth (Liz) Gross. The two were married in 2013 and made their home in Louisville, Kentucky.

Doug was preceded in death by his father Paul Fenn and first wife Donna. He is survived by his wife Liz Gross, mother Marjorie Fenn, his son Chris, daughter-in-law Summer, and granddaughter Harper, sisters Tina and Julie (Bob), brothers Mark (Rebecca) and Bruce (Tracie), two nephews, and five nieces. He will be greatly missed by the Nix family—Christian Nix and Barbara Liffick (Thomas), and the Gross family—Ginny, Kay, Gary, Rick, Laura, Anne, Jeff, Dave, Tracy, and two generations of nieces and nephews.

His family and friends were blessed to have had him in our lives, we will miss him and hold the memories of him in our hearts.

A private service is being planned by the family for Saturday in Tell City. Arrangements are being managed jointly by the Highland Funeral Home in Louisville and the Huber Funeral home in Tell City.