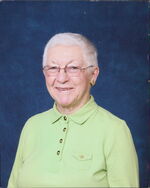 Elizabeth “Bette” Greene Zeller, our beloved mother, grandmother and great grandmother passed away on May 8, 2022 at Nazareth Home in Louisville, Kentucky.

Bette was born in Louisville, KY on August 19, 1926 to the late Joseph B. Greene Sr. and Margaret Cleary Greene.

Bette attended St. Helen’s Grade School and graduated from Ursuline Academy High School. Bette was employed by C.T. Dearing prior to starting her family. Bette was preceded in death by her loving husband, Robert A. Zeller Sr. They celebrated 46 years of marriage together.

Bette’s greatest joy was being with her family. She had a strong spiritual faith. She was a long-time parishioner at St. Albert the Great, where she served in many roles such as Eucharistic Minister. She enjoyed many years of fellowship with their senior group, Al’s Aces. She was a talented quilter and spent 27 years volunteering with the St. Joseph Children’s Home Sewing Society. She had a love for the University of Louisville Cards and cheered them to many victories. She was a travel enthusiast and avid reader. Bette leaves us a legacy of love, strength, generosity and kindness.