To share your memory on the wall of Elmer Finch, sign in using one of the following options:

Provide comfort for the family of Elmer Finch with a meaningful gesture of sympathy.

Bryce was commissioned in the US Army Reserve, Military Intelligence branch and served 30 years retiring as Lieutenant Colonel. Military education in Intelligence, logistics (Industrial College of the Armed Forces) and Command & General Staff followed. Bryce served in the Defense Intelligence Agency in Washington. He was most proud of his contribution to planning for the Son Tay Raid in Vietnam in 1970 using his photo interpretation skills.
In Nashville, Bryce married Doris Brown in 1950. His family grew with son, Stephen and daughter, Valerie. In 1960 Bryce became a photographer for Eastman Kodak in Rochester, New York, later transferring to graphic arts tech rep in Columbus, Ohio, and to Louisville, Kentucky in 1971 working with printing companies.
A lifelong member of Baptist churches, Bryce served as a deacon in First Baptist, Nashville, helped lead a renovation campaign in Lake Avenue Baptist in Rochester, and was a faithful member of the Hannah class of St. Matthews Baptist in Louisville, as well as serving in different capacities there.
In retirement, Bryce enjoyed travel, especially to Europe and Israel. He loved his 104th division reunions and retracing their WWII march across France, Holland, Belgium and Germany, including heartwarming receptions from liberated towns. Bryce served as President of the 104th division association (Timberwolves) keeping connections to many veterans and widows.
Bryce devoted himself to the care of his ailing wife for several years. He enjoyed his grandchildren. We recall a family reunion in Maine where he spent some hours assembling a thousand piece puzzle with granddaughter Steffi, who inherited his meticulous cast of mind and talent for spatial relations and math.
Bryce was preceded in death by his wife, Doris in 2011, his parents and 4 sisters. He is survived by son, Stephen (Kim) of Nashville,TN, daughter Valerie Moon (Alan) of Carrollton, TX, grandsons, Jonathan, Daniel (Alexandria), granddaughter Stephanie (Kevin) and two great grandchildren, Kennedy and Atticus, as well as many nieces and nephews.
Read Less

To send flowers to the family or plant a tree in memory of Elmer Bryce Finch, please visit our Heartfelt Sympathies Store.

Receive notifications about information and event scheduling for Elmer

We encourage you to share your most beloved memories of Elmer here, so that the family and other loved ones can always see it. You can upload cherished photographs, or share your favorite stories, and can even comment on those shared by others. 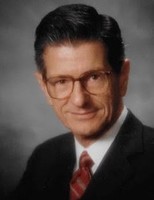