To share your memory on the wall of Eric Graeser, sign in using one of the following options:

Eric was preceded in death by his grandparents, Emil and Nancy Graeser. He leaves behind his parents, Janet and Kurt Graeser, brothers Scott (Natalie) and Brian Graeser and grandparents, Jack and Norma Wessling. Eric was a thoughtful uncle to his niece, Elizabeth (with whom he shared his August 4th birthday) and nephew, George for whom he drew Star Wars and other characters much to George’s delight and our amazement. Eric had an abundance of aunts, uncles and cousins. Never having met a stranger, Eric had friends across the country. Eric was quick to put others at ease, always had a kind word and something humorous to share.

Eric had many passions in life including expressing his creativity through his work, drawing, painting, sketches, and other forms of art. He also enjoyed cooking, canning, charcuterie, home brewing, traveling, the outdoors, and cheering on his favorite teams.

He was a 1998 graduate of St. Xavier High School and studied graphic design at the University of Kentucky.

In lieu of flowers, gifts in his memory may be directed to Down Syndrome of Louisville or the Waterfront Botanical Gardens.
Read Less

To send flowers to the family or plant a tree in memory of Eric Michael Graeser, please visit our Heartfelt Sympathies Store.

Receive notifications about information and event scheduling for Eric

We encourage you to share your most beloved memories of Eric here, so that the family and other loved ones can always see it. You can upload cherished photographs, or share your favorite stories, and can even comment on those shared by others.

The Goose Gang sent flowers to the family of Eric Michael Graeser.
Show you care by sending flowers

Posted Oct 15, 2020 at 10:12pm
Kurt, Janet & family - My thoughts and prayers are with you guys during this challenging time. I alway enjoyed talking with Eric and smile he always had on his face. Todd Hall, Louisville
Comment Share
Share via:
HS

Posted Oct 14, 2020 at 03:25pm
Please accept our most heartfelt sympathies for your loss... Our thoughts are with you and your family during this difficult time.

Flowers were purchased for the family of Eric Graeser. Send Flowers

Posted Oct 09, 2020 at 08:10am
Kurt and Janet, I am so saddened to hear of Eric's passing. It was such a joy to grow up next door with your family. I'm sending a cyber hug your way and sending prayers.
Comment Share
Share via:
JG

Thank you Michelle. The Graesers and Yeagers were good neighbors to each other. Love and hugs to you and family.
TG

Posted Oct 08, 2020 at 05:37pm
Sending love and peace to all who knew our friend and Smoking Goose's first employee, Eric "Easy" Graeser, who earned his nickname for working tenaciously but joyfully. Our "Easy" was so quick with a smile and a joke that strangers became friends fast. He followed his passions, worked hard to sharpen his skills, and loved sharing with his family and friends. It's a testament to his spirit that there are so many of us who miss him so much. ~ your Goose Gang: Smoking Goose & Goose the Market, Indianapolis, Indiana

Eric is the first to complete our 18 month apprentice program! Two years ago, before Smoking Goose was even smokin', Eric followed his protein passions to Indy, leaving behind his hometown Louisville and his graphic design job to be Smoking Goose's first hire. He'd always had a penchant for cooking. "In my house it was either help cook or do dishes," he says. "Who would wanna do dishes?"

As part of the meatery's initial crew, he got a glimpse of what it's like to build a smokehouse from scratch...and knows first hand that it's not always meat magic. Cleaning out the back alley, sanding down bad paint jobs, and scrubbing warehouse floors weren't hazing, but they're not what most protein pupils sign up to do. Still, his commitment to learning the trade from the ground up won him the first spot apprenticing with Smoking Goose owner and butcher Chris Eley, who gave him the nickname that stuck. He goes after each task with a big smile but some fierce tenacity, too. Chris' frequent "Easy does it, Eric" just became "Easy."

Every six months, Eric rotated to a new area of Smoking Goose's production. More than packaging or even sausage making, his favorite stage was last. "Butchering brings the whole apprenticeship together," he says.

When he's not learning the tricks of the meat trade at Smoking Goose, Eric's likely hanging out with his pup, Mr. Beau (who likes University of Louisville basketball almost as much as Eric) or keeping up his design skills through drawing and painting. Keep an eye out for his new dry-erase doodles on the freezer in Smoking Goose's meat locker--they change each week!

From time to time, he lends his talents to special, limited releases at Smoking Goose like crowd-favorite "Ham Grenades," the hand-trimmed hamlettes Eric dry cured under coarse black pepper in the Gascon tradition. But if he had to choose one Smoking Goose meat treat that's most like his spirit, Eric opts for Coppa because, as he says, "It's complex and expressive." Mr Beau, indeed.
Comment Share
Share via:
JG

Thank you so much for this tribute to Eric. I’m glad our sad news has spread to Indy. I preferred his Ham Grenades too. Hugs to the Goose Gang. Janet Graeser
C

Thank you Candice
4 Comments | Show All 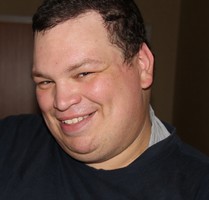 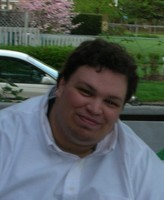