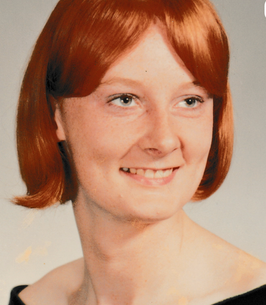 Print
Helen Whipple Moss, 68, died on November 14, 2018 at the Sam Swope Care Center among several of her closest friends.

She was preceded in death by her husband, Allen Francis Moss; her parents, Francis and Lucille Whipple; brother, Richard Whipple; and only nephew, Keith Whipple. She is survived by her brother, David Whipple, Reston, Virginia. She is also survived by an uncle, Jack, and many cousins.

She was born September 16, 1950 in Erie, Pa and she graduated from McDowell High School, Millcreek Township, PA. She attended Gannon University in Erie from 1970-1972 and graduated from the University of Kentucky in 1973 with a degree in Marketing.

She began her professional career with a position in PR with the Farm Credit Bureau of Kentucky. And later was employed by Humana where she worked for 27 years. She retired from Humana in 2017 after witnessing its tremendous growth and contributing to its key position in the health insurance industry. She had the respect, esteem, and confidence of her colleagues and industry partners. One of her unusual duties for many years was to organize the Humana-sponsored Great Balloon Festival, part of the Derby Festival.

She was excited about travel and visited Canada, Mexico, Spain, France, and Italy. She was an avid swimmer and a licensed SCUBA diver. She did many dives in eastern New York, but a particular favorite was the Akumal reef off the Yucatan, Mexico

She followed NASA and was an aficionado of the space shuttle program, once spending two weeks in Florida to view a launch that was delayed for months. Her desk is riff with Nasa memorabilia and photos.

She was an accomplished photographer in the process of reviving her talent as a visual artist.

To send flowers to the family of Helen Whipple Moss, please visit our Heartfelt Sympathies Store.

We encourage you to share any memorable photos or stories about Helen. All tributes placed on and purchased through this memorial website will remain on in perpetuity for future generations.