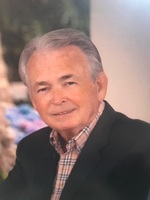 It is with great sadness we announce the passing of Hank Wagner on Thursday, March 4, 2021. Hank was 78 years old. Beloved husband to Donna Sue Wagner (nee Cummins) and loving father of Stephanie Wagner Scheller (Ray), Jeffrey Wagner (Shannon) and Alex (Catherine) Wagner. He was the proud grandfather of Audrey Scheller, Raymond Scheller, Scarlett Scheller, Kamryn Scheller, Henry Carrh Wagner IV and Jeffrey Charles “Chase” Wagner II. Hank also enjoyed spending time with Donna’s son and daughter-in-law, Marc and Ruth Ann Rowland, and their children.
Hank played basketball in high school, received a B.S. in Economics at West Virginia University and a Masters in Hospital Administration at Duke University. At WVU, he was president of Pi Kappa Alpha Fraternity, and a member of Beta Psi, an economic academic honor society. Following graduation, Hank entered the United States Army as a lieutenant and served as Adjutant at Ireland Army Hospital at Fort Knox, Ky. Following a two-year tour of duty in 1968, Hank joined the management staff at Case Western Reserve University Hospitals in Cleveland, Ohio. In 1972, he was appointed Executive Vice-President of Jewish Hospital in Louisville, KY and in 1980 was named President and CEO, serving in that capacity for 33 years.

During his tenure, he helped grow Jewish Hospital from a single facility to a system of 10 hospitals and outpatient facilities. Also under his leadership, Jewish Hospital pioneered some 70 medical advancements, including Kentucky’s first heart, lung, kidney, pancreas and liver transplants, the first implantable artificial heart and the first hand transplant. Hank received an honorary PhD from the University of Louisville in recognition of his role in establishing the Kentucky “Bucks for Brains” program, which is credited for receiving and financing some 75 medical research faculty to the University of Louisville School of Medicine. The conference center at Jewish Hospital was named the “Hank Wagner Conference Center” at his retirement in 2005.
Among his several accomplishments, Hank was named a Distinguished Alumni of the WVU College of Business and was a Fellow in the American College of Healthcare Executives. He served as Chairman of some 10 organizations in Louisville, including LMCOC, United Way, Fund for the Arts, University of Louisville Foundation, Cardiovascular Innovation Institute, Downtown Development Corp, Louisville Health Enterprise Network, Leadership Louisville, Black Achievers, Volunteers of America and the Mayor’s annual Leadership Breakfast. He additionally served on the boards of some 10 other organizations.

The recipient of numerous civic and health care awards throughout his career, Hank was the 2003 commencement speaker at the West Virginia University College of Business and was recipient of the Kentucky Hospital Association Award of Excellence, the University of Louisville Athletic Association Hickman-Camp Award and the Greater Louisville Inc.’s Silver Fleur de Lis Award. In 2002, he was named to the Kentucky Business Hall of Fame and Received the Citizens Laureate Award from the American Institute of Architects. He received the Blanche Ottenheimer Award from the Jewish Community Center in 2000, was named the Kentucky Medical Association “Layman of the Year” in 1999 and received the Health Care Award of the Year from the Combined Health Appeal in 1998. Over the years, he received the Entrepreneur of the Year Award, the Leadership Louisville “Thomas Simons” Distinguished Leadership Award, the Louisville Urban League’s Equality Award, the American College of Healthcare Executives Regents Award, the Thurgood Marshall Award and was named “Person of the Year” by the Voice Tribune Newspaper in 2005.
Among his other endeavors, Hank helped to found Eclipse Bank, and served on the boards of the Bank of Louisville, Sullivan University, Biomedical Solutions, WVU Medical Center, the University of Louisville, the Speed Art Museum, the Louisville Orchestra and the KY Center for the Arts.

With Dr. James Ramsey, President of the University of Louisville, Laman Gray, Jr. M.D. and Senator Mitch McConnell, Hank and Donna established the Cardiovascular Innovation Institute, a partnership with the University of Louisville and Jewish Hospital. Research continues on the artificial replacement heart devices in the 8-story center, and the conference room at the CII bears the name the “Hank and Donna Wagner Conference Center.”

Hank and Donna retired to Naples Florida. In those years, Hank enjoyed golf at Pelican Bay Country Club, participating in the Naples Council on World Affairs, fishing with the guys and dinner parties with friends.
There will be a private family service at Cave Hill Cemetery in Louisville, KY at a later date. In lieu of flowers, donations may be made to the Hank and Donna Wagner Endowment for Excellence in Heart Care, C/O Legacy Foundation of Kentuckiana, 1451 Harrodsburg Road, Suite D308, Lexington, KY 40504