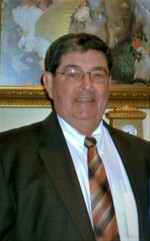 Jim worked in sales and was retired from Bonnycastle Appliances and Charlie Wilson Appliances. Jim previously worked for General Electric. Jim served his country as a member of the United States Armed Forces from 1955 until 1959, serving in Germany. His sense of patriotism and love for his country never ceased.

The most important relationship Jim had in his life was his relationship with Jesus Christ. Jim was a devout born-again Christian and a longtime member of Southeast Christian Church. Jim attended church regularly and was a longtime member of the Two-by-Two class at Southeast, led by Dick Snider. Dick Snider and the Two-by-Two class prayed for Jim and Shirley throughout all of his health issues over the years, and for that, Jim and Shirley were both so grateful. Jim impressed upon his grandchildren the importance of going to church, reading The Bible, and having a relationship with Christ. Jim would tell you he wasn’t perfect, but his faith in God and the power of salvation never abated.

Jim and Shirley never had children together but were very generous with their time and resources with Steve’s stepdaughter and step-grandchildren. After Steve died, they remained an important part of their lives and led their family with timeless class and grace. The lessons they taught and the memories they made will stay with them for the rest of their lives.

In his later years, Jim enjoyed a special relationship with his great-grandson, Byron. Jim and Shirley took Byron to church and spent summers exploring amusement parks, caves, fields, the zoo, watched movies, played board games and miniature golf, and taught him important lessons about life.

His funeral service will be held at Highlands on Thursday, May 19th at 12:00 pm, with burial to follow at Resthaven Cemetery.