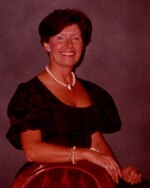 On Thursday, June 9, 2022, Jeannette Frances Tinsley Bond of Louisville, Kentucky, passed away. She was 80 years old. She was predeceased by her parents Anna Marie Gast Tinsley and Gordon Tinsley, and her beloved identical twin, JoAnn McCormick.

She is survived by the love of her life, Lawrence (Larry) Bond, and her three children, Carolyn Corder (Barry), Diane Shreve (Mark), and James Michael Mardis (Aneira). She had 19 grandchildren, and 1 great-grandchild. She is also survived by her two sisters Mary Lou Meyer and Angela Denham, and her brother Art Tinsley.

Born in Louisville, May 30, 1942, Jeannette attended St. Agnes School, Sacred Heart Academy, and the University of Louisville. She worked for Citizens Fidelity Bank, served as the receptionist for Governor John Y. Brown, recruited for the International Air Academy and later for Sullivan University.

Jeannette enjoyed the game of golf usually at Hunting Creek or Hurstbourne Country Clubs, tennis, needlepoint, helping others, reading, particularly Shel Silverstien books with her children, “date-nights” with her sisters and their husbands, and dressing to match her twin JoAnn. Jeannette spent most of her time in Louisville where she attended Highlands Presbyterian Church. In later years, she resided in Sarasota, Florida, where she attended Church of the Redeemer, and loved to sit with her husband, Larry, and watch the sun, the boats, the walkers, and the waves.

The service will be on Friday June 17, 2022, and is a private family event, at Highlands Funeral Home 3331 Taylorsville Road. The family appreciates all the well wishes and prayers from others.