To share your memory on the wall of JoAnn McCormick, sign in using one of the following options:

She married her high school sweetheart Maurice Darryl McCormick and they were married for 57 years. She is survived by her 2 children Darryl McCormick (Denise) and Angela McCormick Bisig (Arnold Rivera). She had 5 grandchildren, Damon McCormick and Madison Elliott and Lawrence, Lincoln and John-Logan Bisig, and 2 step-grandchildren Gabriella and Noah Rivera. She had 3 great-grandchildren children Ethan and Calvin Elliott and Annie Jane McCormick. She is also survived by her 3 sisters Mary Lou Meyer, Angela Denham and Jeannette Bond and her brother Art Tinsley.

JoAnn attended St. Agnes School and Sacred Heart Academy. She received a BS in Sociology at the University of Louisville and a Masters Degree in Counseling Psychology from Spalding University. JoAnn worked until the age of 70 helping families in Louisville and Fort Meyers, Florida, where she lived for 5 years. She worked for the Jefferson County Department of Human Services, Lee Mental Health Hospital in Florida and she finished her long career at Baptist Hospital East in Louisville.

JoAnn enjoyed baking "State Fair" winning breads, going to "date-night" movies with her Sisters, dancing to Reggae music, and helping her husband at Agape of Jesus Church. JoAnn is donating her body for medical research.

To send flowers to the family or plant a tree in memory of JoAnn Tinsley McCormick (Tinsley), please visit our Heartfelt Sympathies Store.

Receive notifications about information and event scheduling for JoAnn

We encourage you to share your most beloved memories of JoAnn here, so that the family and other loved ones can always see it. You can upload cherished photographs, or share your favorite stories, and can even comment on those shared by others.

Posted Aug 21, 2019 at 08:40am
So sorry to here this news. Joann was a year older at SHA. I remember getting on the bus and going to the West end for Mac’s baseball game. Where have all the years gone. Sending love and prayers to family.
Love
Maryanne Tassi Riggs
Comment Share
Share via:
BO

Posted Aug 16, 2019 at 12:24am
JoAnn has a special place in our hearts here in El Paso, TX.
Holy Spirit of Hope church prays for JoAnn's eternal rest with our heavenly Father.
We pray for God to mend the family's hearts that hurt.
We love Archbishop Maurice's family. God bless.
Comment Share
Share via:
HT

Posted Aug 15, 2019 at 11:28pm
To the McCormick family in remembrance of the peace-filled Joann McCormick.

Flowers were purchased for the family of JoAnn McCormick. Send Flowers

Posted Aug 15, 2019 at 11:14am
Our deepest sympathy and prayers are with JoAnn's family. John and I have had the pleasure of knowing JoAnn and her husband Maurice for over 24 years. As members of their church, we were honored with her friendship. JoAnn was truly a lovely lady and we will forever miss her and her beautiful smile. We know JoAnn is with her lord and savior and pray for the family during this difficult and sad time.
John and Laura Szafranski
Comment Share
Share via: 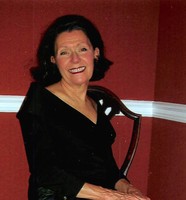