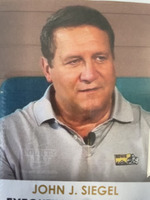 John Siegel, 72, of Louisville, passed away on Sunday, April 3rd, after a long, and valiant fight with cancer. John was born on August 21, 1949 to Cecelia Karem Siegel and John J. “Jack” Siegel. John was a proud alum of both Flaget High School and St. Joseph’s College, where (although an intelligent young man) he excelled most on the athletic field where he was a talented wide receiver.

Post-college, John became a prolific entrepreneur. Among one of his first business accomplishments, at the tender age of 28, was purchasing the Loews United Artist Theatre, which was at risk of becoming a parking lot; working hard to obtain financing to restore it to its original, historical beauty, and turning it into the live entertainment venue now known as The Louisville Palace Theatre, in addition to Stage Door Johnnies in the accompanying space. To thank him for his contributions to saving this architectural treasure, he will be forever immortalized in the lobby “Ceiling of Celebrity Faces” (he is the only gentleman with short hair who bears a striking resemblance to Elvis).

He also formed businesses such as Flaget Fuels, Inc., Puma Energy Corp., Green Bay Fuels, Inc., Bowie Resources, LLC., Western Bit Acquisitions, LLC, among many other business ventures and partnerships around the world, and was honored to be named a Kentucky Colonel.

More than his athletic prowess and business acumen; however, John will most be remembered for his larger than life personality, fearlessness, wickedly funny humor, and ability to selflessly and whole-heartedly give love. He was a provider to many, a benefactor of various charitable causes, a fierce protector of his loved ones, and an extremely proud husband, father, and popsi to his grandchildren.

If so inclined to send expressions of sympathy, John loved flowers (despite his rough exterior), or perhaps in honor of his generous and philanthropic spirit, make gifts to charitable organizations near and dear to your heart, or simply pay it forward by performing small acts of kindness.