To share your memory on the wall of John Toma, sign in using one of the following options:

John rose through the ranks over the course of 30 years at GE, including serving as the manager of the Home Laundry Engineering Group. He was issued multiple patents for inventions he developed on behalf of GE. John was born to be an engineer, and had an innate ability to fix just about anything.

John was an active person with varied interests, including golf, tennis, bowling, fitness training, and oil painting. He and Carolyn traveled extensively around the world with their friends. Following retirement, John and Carolyn spent many winters in Florida, but ultimately returned full time to Louisville to be closer to family and friends and moved to The Glenview Condominiums, where he served as Board President.

John was a longstanding member of Broadway Baptist Church, where he served as Deacon, Chair of the Building Maintenance Committee, and many other positions. Every Tuesday for many years, John single-handedly applied a fresh coat of paint to a large portion of the interior of the church building - a project he continued into his 90s. John will be remembered as a strong, caring man who was generous with his time and talents.

John is survived by his wife Carolyn; children Mark (Genia), Terry (Melanie), and Robin (Mark); grandchildren Brittany Riddle, Blair Close (Gabe), Mattie Toma, and Liam Toma; great-grandson Micah Close; and a brother Dan Toma. The family extends special thanks to his primary care physician Robert E. Ellis, M.D., and to the residents and staff at The Glenview Condominiums and Brownsboro Park retirement community for their friendship and support in his later years.

To send flowers to the family or plant a tree in memory of John William Toma, please visit our Heartfelt Sympathies Store.

You will receive any future notification messages.
Print

George and Deb Sabo sent flowers to the family of John William Toma.
Show you care by sending flowers 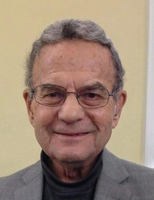