To share your memory on the wall of Katherine Edsell, sign in using one of the following options:

Provide comfort for the family of Katherine Edsell with a meaningful gesture of sympathy.

The widow of Allan L. Edsell, an executive with BellSouth, who died in 1984, Mrs. Edsell was the daughter of Joseph P. and Katherine M. Letterle White and granddaughter of John and Jenny Letterle, a former state senator and Patrick and Bridget White from Cool Athea, County Cork, Ireland, all deceased.

Funeral services will be at 1pm Tuesday, July 16, 2019, at Highlands Funeral Home, 3331 Taylorsville Rd. with burial in Cave Hill Cemetery then a reception to follow at Wildwood Country Club. Visitation will be from 11am until service time Tuesday, at Highlands.

To send flowers to the family or plant a tree in memory of Katherine P. "Kaye" Edsell (White), please visit our Heartfelt Sympathies Store.

Receive notifications about information and event scheduling for Katherine

We encourage you to share your most beloved memories of Katherine here, so that the family and other loved ones can always see it. You can upload cherished photographs, or share your favorite stories, and can even comment on those shared by others.

Posted Jul 29, 2019 at 10:40pm
The Ky Derby and St Patrick'd Day will never be the same without Kaye Edsell! She touched so many lives in so many ways. I will think of her with smiles for ever.
Comment Share
Share via:
HS

Posted Jul 14, 2019 at 11:10pm
We are with you in sprit during this difficult time. All our love, Brad, Oriole, Olive, Mary, Glenn, Mark, Melanie, Danny and all of the Pendletons

Flowers were purchased for the family of Katherine Edsell. Send Flowers

Posted Jul 14, 2019 at 10:34pm
A Beautiful, Intelligent, Vibrant, Loving Woman whom We Women ought to try to pattern Ourselves after... PEACE be with You...and All who have loved You. No regrets from a Life, well-lived.
Comment Share
Share via:
BB

Posted Jul 14, 2019 at 03:03am
My deepest condolences to Mike, Joyce and family on the loss of your sweet mom/grandmother. She will forever continue to live in your hearts and in your memories. Sending much love your way! Delia Smith
Comment Share
Share via: 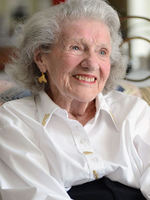