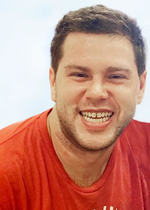 Kyle Andrew Kueber, a spirited adventurer with a vast network of friends around the world, passed away after a tragic accident while making improvements to his home in Hanoi, Vietnam, on June 17, 2019. He was 27.

The beloved son of Bridget McKiernan Kueber and David Kueber, Kyle grew up in Anchorage, Kentucky, graduating from Trinity High School in 2010. An avid fan of University of Louisville sports, he went on to earn a degree in sports management from St. John’s University in New York.

Kyle’s greatest passions were global travel and especially, exotic foods. These led him to Vietnam, where he lived for three years. There he explored every nook and cranny of Hanoi, traveled throughout Asia, hosted memorable visits with many friends and family, and worked to develop a business that would allow him to live his dream in Vietnam.

The one solace to Kyle’s heartbroken family and friends is that he was happy and living his life to the fullest. Two weeks before his passing, he wrote about the moment he decided to move to Southeast Asia. It came, in classic Kyle fashion, as he ate “the best damn steak I’d ever had.” After one bite, “I knew I needed to move to Vietnam,” he said. He became “determined to move and create a new life in a new land, one that has taken much grit and perseverance to build, and one that I will never take for granted.”

Kyle’s other interests also were intense. From a young age, he impressed everyone with his expansive knowledge of national and international politics. He was a walking encyclopedia of college and professional sports. He loved Muhammad Ali, and Graham Greene’s “The Quiet American.” And of course, he was proud to own every single episode of Anthony Bourdain. In the past year, Kyle found yoga and meditation to balance his active mind, and he became a regular visitor to Pure Flow Yoga in Ko Pha-ngan, Thailand. Kyle’s endless passion for life will be missed by all.

The feature of Vietnam that Kyle loved most was the intense friendliness and caring of the Vietnamese residents, a people who, like Kyle, have never met a stranger. Kyle’s many friends in Vietnam, in Louisville, and worldwide have been an indescribable source of support and inspiration through this crisis.

Kyle is survived by his mother Bridget McKiernan Kueber and her fiancée Scott Trager; his father and step-mother David and Suzanne Kueber; sister and brother Andra and Patrick (Sharnei) Kueber; step-brothers Ryan (Katie) and Thomas Gallagher; grandfather Richard Kueber; and numerous aunts, uncles, and cousins. His grandparents Doris and Robert McKiernan and Frances Kueber join him in eternal rest.

Visitation will be held on Thursday, June 27, 2019, from 2-7 p.m., with a Celebration of Life to immediately follow, in the President’s Room at the Yum Center in downtown Louisville. In lieu of flowers, the family encourages you to be adventurous. Take a trip someplace new! Eat a crazy new food! Practice yoga on the beach! Make new friends every day wherever your corner of the world is!

KFC Yum Center lobby doors are directly on Main Street in-between 2nd and 3rd street. The arena garage attached to the arena has entries on both 2nd and 3rd street. You may park in this garage (or elsewhere, all are paid parking spots). When entering from the garage walk around to the front on Main for the East lobby door (closest to 2nd street)