To share your memory on the wall of Lawrence Leis, sign in using one of the following options:

Larry was the loving husband of 54 years to Bettye M. Leis, who preceded him by 9 years. He was the father of Susan, M... Read More
LEIS, LAWRENCE JOSEPH, of Louisville, KY entered into his Heavenly Reward on Wednesday, March 4th, in Cape Coral, FL.

Larry was the loving husband of 54 years to Bettye M. Leis, who preceded him by 9 years. He was the father of Susan, Marc (Yumiko), and Jay (Ana Maria) and beloved grandfather of Joseph, Joy (Nick), Nicolas, and Benjamin. He is also survived by his brother Tom (Sandy), and many family and friends who love him.

Larry started his career in architecture at the firm of the Louis & Henry Group in 1960 and worked his way up to be a Partner, President, and Owner of one of the largest architecture firms in Kentucky. He also served many years in the Kentucky American Institute of Architects (KAIA) including as President. In the American Institute of Architects (AIA), he was inducted into the highest level, the AIA College of Fellows and then became FAIA Chancellor in 2004-5 to give awards to young architects all over the world.

His body of work was a large one centered mainly in Kentucky and included several international projects. Some of his designs were the addition to the Louisville Free Public Library downtown, the Hall of Justice, the WHAS building, the Louisville Science Center, the H & B Bat Museum. He also won an AIA National Design Award for the Natural History Museum. School projects included buildings on the campuses of U of L, the Presbyterian Seminary, the Baptist Seminary, EKU, and Berea College. A community favorite was the beautiful “Merry-go-round” St. Mathew’s Episcopal Church.

In addition to his professional accomplishments, Larry loved well. He loved his wife Bettye, his 3 kids, his 2 daughters-in-love, his 4 grandchildren and his many friends and he was well-loved in return. He also loved his Lord Jesus - though a life-long believer, he re-dedicated his life to Christ and was baptized at the age of 80 at Southeast Christian Church Indiana. He served for many years on the Board of the Salvation Army of Louisville. He also enjoyed his new church, Cape Coral Christian in Florida and was making friends there.

His Celebration of Life Service will be at 11 a.m., Saturday, March 14, 2020 at Highlands Funeral Home, 3331 Taylorsville Rd., Louisville with a graveside service following at Cave Hill Cemetery. Visitation for family and friends will be on Friday, March 13 from 3-8 p.m. and again on Saturday, March 14 from 9-11 a.m. at Highlands Funeral Home. Please come and celebrate his life with each other and share memories of a life well lived.

The family requests that instead of flowers to please make a donation in Larry's name to The Salvation Army of Louisville, KY https://www.salvationarmylouisville.org/financial-donations or the National Kidney Foundation, https://team.kidney.org/campaign/Lawrence_J_Leis_Sr_Louisville )
Read Less

Receive notifications about information and event scheduling for Lawrence

You will receive any future notification messages.
Print

We encourage you to share your most beloved memories of Lawrence here, so that the family and other loved ones can always see it. You can upload cherished photographs, or share your favorite stories, and can even comment on those shared by others.

Posted Mar 13, 2020 at 11:37am
We are friends of Marc and Yumiko and family -- one of our "mission families' at Eastside Christian Church in Jeffersonville, Indiana. We want to send a special message to them, telling them of our sadness at the passing of Mr. Leis. We had not ever met him, but have followed Marc's journey in the recent years of his long distance as well as in person of his time with his dad. We know Marc and Yumiko's young adult children have been blest by their grandpa's life and influence in their growth and development. We are so thankful that Mr. Leis is in heaven now and rejoicing in the forever life he will be enjoying w/his loved ones. Praying for the family and for the gathering in during the visitation and at tomorrow's celebration of his life.
With love in Christ,
Carol and Bob Ammerman,
Eastside Christian Church
Jeffersonville, Indiana
Comment Share
Share via:

Posted Mar 11, 2020 at 07:45pm
what a great man Larry was; a true gentleman! He will be missed by all who knew him...condolences to his family
Comment Share
Share via:
HS

Posted Mar 10, 2020 at 10:23am
With heartfelt condolences, your friends at Senler, Campbell & Associates.

Flowers were purchased and a memorial tree planted for the family of Lawrence Leis.

Posted Mar 09, 2020 at 02:55pm
Sending my heartfelt prayers and condolences to the Leis family. I served on the board of The Salvation Army with Larry and always looked forward to our conversations. He was quick with a friendly hello and was tremendously thoughtful, remembering small details about my family and job. It was truly a pleasure to know him.
Comment Share
Share via: 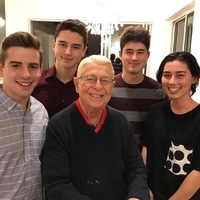