To share your memory on the wall of Louis Nash, sign in using one of the following options:

To send flowers to the family or plant a tree in memory of Louis D. Nash, please visit our Heartfelt Sympathies Store.

Receive notifications about information and event scheduling for Louis

We encourage you to share your most beloved memories of Louis here, so that the family and other loved ones can always see it. You can upload cherished photographs, or share your favorite stories, and can even comment on those shared by others.

Bill and Sheila Randol and family and InLine Engineers sent flowers to the family of Louis D. Nash.
Show you care by sending flowers

Posted Jan 18, 2019 at 01:04pm
I’m sending my sincere condolences to the Nash family and friends. This is one of life’s greatest challenges that we have to face. Jesus said, did, and promised something that gives us comfort and hope. In the Bible at John 11:11-14, Jesus likened death to sleep. This comfort us in two ways: 1) we are assured by those words that our loved ones are not suffering or in pain. 2) If a person is just sleeping, he will wake up! Notice what Jesus does next at John 11:43-44, this is amazing! If you would like to know more details about this, please download a free copy of the brochure Good News from God @ Jw.org and read lesson 6 along with the Bible.
Comment Share
Share via:
J

Posted Jan 17, 2019 at 02:13pm
To the Nash Family: Sorry to hear of your loss,,May the God of all comfort give you peace and comfort at this most difficult time. Please read 2 Corinthians 1:2-4 - John 5:28;29 Where Jesus gives us a wonderful hope that is soon to be realized. That is the resurrection hope.. What a blessing for your family and mine. If you would like to learn more about this wonderful hope please go to jw.org and download a free copy of the book” What Can The Bible Teach Us ? And read chapter 7” There Will Be A Resurrection ? It is our hope that this information will help you and you and your family now and in the future.
Comment Share
Share via:
BF

Bill and Sheila Randol and family

Bill and Sheila Randol and family purchased flowers for the family of Louis Nash. Send Flowers 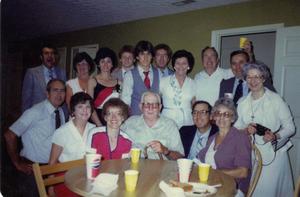