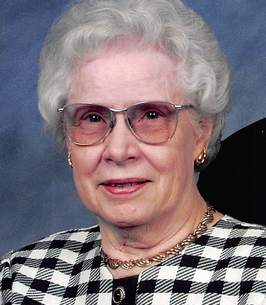 Print
Loyce C. Hill Arnold, passed away on November 2, 2018 in Louisville, KY. She is survived by her daughter, Madeline Arnold Gerding and son-in-law, Samuel H. Gerding, her two grandsons, Samuel E. Gerding of Houston, Texas, Ruben H. Gerding of Cape Girardeau, Missouri, her four great-grandchildren, Arianna, Jaden, Isabella and Lilah of Houston.
Loyce was born in Logansport, Butler County, KY, in 1927. She attended schools in Butler and Ohio Counties. After graduating High School in 1945, Loyce continued her education at Lockyears Business College in Evansville, Indiana, where she graduated in 1946.
In 1947, Loyce married Edwin H. Arnold of Mt. Vernon, Illinois. They had one daughter. After 68 years of marriage, Edwin preceded her in death in 2016.
During her lifetime, Loyce did her best to live by the “Golden Rule” and to live up to the ideal of a worthy woman as described in Proverbs 31:10-31 of the Holy Bible.
To her family and others, Loyce showed a character of honesty, patience, understanding, stability, hope, love and a surprisingly quite, but resilient strength.
Her visitation will be Friday, November 9th from 9am to 1:30pm, at Highlands Funeral Home, 3331 Taylorsville Rd, with Graveside services at 2:00 pm at Louisville Memorial Gardens East, 11601 Ballardsville Rd, Louisville, KY 40241.

To send flowers to the family of Loyce Corine Arnold, please visit our Heartfelt Sympathies Store.

We encourage you to share any memorable photos or stories about Loyce. All tributes placed on and purchased through this memorial website will remain on in perpetuity for future generations.