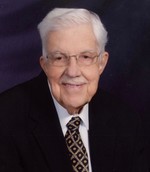 Marcus was a veteran of World War II, serving in the 3rd Army Air Forces, 305th Fighter Squadron. He was a graduate of the University of Kentucky, and followed his beloved Wildcats as a long-time season ticket holder for both basketball and football. He also attended Kentucky Wesleyan College where he was a basketball letterman. Mr. Shearer retired from Overhead Door Company of Louisville in 1989.

After retirement Marc and Vic volunteered with the Kentucky Baptist Disaster Relief team working weather related disasters for 13 years, and at the Kentucky Center for the Arts for 19 years. Marcus was a Kentucky Colonel, a member of the American Legion, and a member of The Society of Boonesborough. Marc and Vic traveled extensively in retirement, visiting all fifty states, eleven Canadian provinces, and over forty foreign countries on five continents.

Visitation will be from 5:00 pm to 8:00 pm EST at Highlands Funeral Home, 3331 Taylorsville Road, Louisville, KY on Wednesday, January 22, 2020. Funeral services will be at 10:30 am EST on Thursday, January 23, 2020 at Highlands Funeral Home. There will be a graveside service at the Hiseville Cemetery in Hiseville, Barren Co., KY at 2:00 pm CST the same day, with full military honors.

Memorial gifts may be made to Kentucky Wesleyan College or the Kentucky Talking Book Library.