To share your memory on the wall of Margaret "Peggy" Osborne Williams, sign in using one of the following options:

Provide comfort for the family of Margaret "Peggy" Osborne Williams with a meaningful gesture of sympathy.

Peggy played the organ, piano, violin and guitar and had a beautiful voice. She followed her love of music to Nazareth College where she earned a music degree. She attended Western Kentucky University to earn a master’s degree in school counseling and education to share her gifts with countless students. Her Delta Kappa Gamma peers became lifelong friends.

Peggy worked as a music teacher then school counselor at JCPS for 43+ years and attended St. Paul Catholic Church. Peggy loved feeling the wind in her hair, cruising that smooth weekday water on Lake Cumberland in their Cobalt boat with Charlie. She loved spending her summers off traveling out west camping, hiking and mountain biking in the National Parks with her family.

To send flowers to the family or plant a tree in memory of Margaret "Peggy" Osborne Williams, please visit our Heartfelt Sympathies Store.

We encourage you to share your most beloved memories of Margaret "Peggy" Osborne Williams here, so that the family and other loved ones can always see it. You can upload cherished photographs, or share your favorite stories, and can even comment on those shared by others.

Love, Morgan, Carrie, and 541 crew, Erin, Sam, and Jeff Houchin, and others have sent flowers to the family of Margaret "Peggy" Osborne Williams.
Show you care by sending flowers

Posted Nov 13, 2019 at 06:27pm
In the 6th grade, I got a letter from Ms. Williams inviting me to join the new Governor's Cup team at Conway Middle School. It was through the academic team at Conway and PRP that I found myself and my tribe. I've been a teacher for 13 years now, and a middle school academic team coach for 3, and she played a major role in that. On top of that, she was a major source of support and encouragement for a nerdy, kutzy kid trying to navigate middle school. My love and thanks to her, and my deepest sympathies to you all.
Comment Share
Share via:
LM

Posted Nov 13, 2019 at 02:47pm
Even though we lost contact over the years, I have always considered you one of my favorite counselors. It was my honor to work with you. I always loved your heart for others and your wonderful sense of humor. Linda Miller JCPS
Comment Share
Share via:
LC

Posted Nov 13, 2019 at 12:46pm
We are so sorry for your loss. Our prayers are with you and your family. Sending our love, The Armbruster Family

Flowers were purchased for the family of Margaret "Peggy" Osborne Williams. Send Flowers 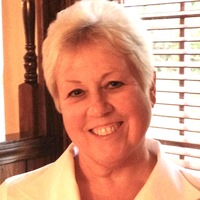