To share your memory on the wall of Mary Newton, sign in using one of the following options:

She was an avid Cubs fan long after moving to Kentucky. Besides watching the Cubs on TV, she was also a masterful bridge player who eventually outlived those with whom she had always played. In high school she was a singer and later was in the choir at St. Raphael.

To send flowers to the family or plant a tree in memory of Mary Costigan Newton, please visit our Heartfelt Sympathies Store.

Receive notifications about information and event scheduling for Mary

We encourage you to share your most beloved memories of Mary here, so that the family and other loved ones can always see it. You can upload cherished photographs, or share your favorite stories, and can even comment on those shared by others.

Pat and Amy Kaelin sent flowers to the family of Mary Costigan Newton.
Show you care by sending flowers

Posted Aug 23, 2020 at 03:58pm
To: Dr. Cathy Newton Strauss,
Rose Howard and Mary Serra Goethals, SCNs send special sympathy and prayers to you upon hearing about your Mother from Lucille and also reading the well written obituary in the CJ. What a beautiful woman and the picture portrays a number of her characteristics- warmth, appreciation of sports (Cubs) and good humor among other many other wonderful gifts. We were so pleased that she spent some time at Nazareth Home, where though unable to visit, we prayed often for our NH residents next door. We join you and your family as you grieve this wonderful woman and all she shared with you for so many years. Blessings and loving thoughts.
Comment Share
Share via:
PK 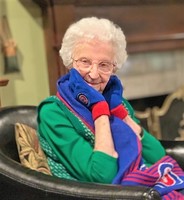