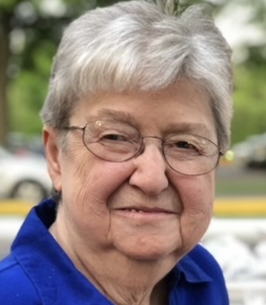 Print
Mary Rose Salerno, 88 of Louisville passed peacefully on October 25, 2018 at Nazareth Home. She was born on April 6, 1930, in Louisville. She worked for Brown & Williamson till she retired in 1985. She was a member of Our Lady of Lourdes Catholic Church.

In addition to her parents, Cecilia née Nolan and Sam Salerno, she was preceded in death by her brother, Paul Salerno and his wife Margie Salerno; honorary parents Mary and James Greenwell; and siblings, Victoria Merkley, Ron Greenwell, Peggy Farmer, Bernadette Brown and David Greenwell.

She is survived by her sisters, Jean Salerno and Kathleen Goodlett; brothers, Bob Greenwell and John Greenwell; along with over 100 others who considered Mary Rose to be their special aunt, honorary grandmother or cousin.

Mary Rose and her siblings lived at Saint Joseph orphanage after the death of their mother, and then came to live with the Greenwell family. Jean and Mary Rose never married. They lived with and cared for Mary Greenwell until her death in 1995. Our family is blessed to have these bonus sisters as part of our lives. Another Saint that will never be canonized, whomever knew her knows that she was a Saint.

To send flowers to the family of Mary Rose Salerno, please visit our Heartfelt Sympathies Store.

We encourage you to share any memorable photos or stories about Mary. All tributes placed on and purchased through this memorial website will remain on in perpetuity for future generations.

Dear Family, Our love and prayers to you all, especially to you Jean. With so many special and delightful memories. Jay & Rita
Jay & Rita Wilkinson - Sunday October 28, 2018 via Heartfelt Sympathies
Share This:
1
Page 1 of 1
Share
×