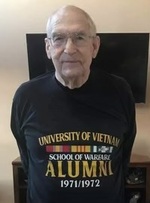 Norman proudly served in the Army for 20 years, 9 months, 11 days. He joined up at age 17, while a senior in high school. He did his first three years and was ready for discharge when he met a lovely young teacher, fresh out of the convent, at an USO Dance at Ft. Knox. After one date, he left Ft Knox and went back home to Michigan. From there he called Mary Helen Kennedy on the phone and proposed. She said yes, and they were married six weeks later.

He worked hard to make a living, working multiple jobs to make ends meet. It will surprise no one to know that he drove a cab as his third job. He drove like a New York taxi driver until his very last drive. When it was too tough to make a go of it, he re-enlisted in the army where he continued his military career. This included time in Korea, where his favorite part was that he got to drive a jeep. Vietnam was a difficult deployment. Part of the time he did dust off work, and worked as a medic, collecting bodies from the field, doing triage, loading them in a helicopter to get medical treatment. He rarely spoke about this. Upon his return home he was so saddened because soldiers were disrespected. During his final years he began to show pride for those years of service and always wore a hat and t-shirt displaying that he was a Vietnam Veteran. When he encountered other Veterans he would immediately swap stories. He could recall the all the minute details of his various deployments. He also served in Germany and various US ports. He would frequently tell his children and grandchildren to, “Join the Army and see the world.”

When Mary Helen got fed up with military life, she packed up her favorite kid in the car and drove to Kentucky. Norman retired shortly thereafter and followed her to Louisville.

Norman’s next career was working at Central American Airways for over 20 years. There, his commanding presence earned him the nickname Stormin’ Norman. He loved this place. It embodied all the parts of his personality and his strengths. He took commitments seriously. When he had his first heart attack, he stopped at the hospital and told them he felt funny in his arm. When they informed him he was having a heart attack, he let them know he needed to go unlock the hanger and start the coffee for the boys. He was mad when they declined his “request”.

His third career was as an FAA inspector in Michigan. He loved this job because it came with a hefty pay raise and a cool badge. Mary was horrified and always complained that he, “Just had to flash that badge and cause drama on every flight.” He enjoyed the extra attention and would often snicker about his adventures “terrorizing the natives”.

He loved being practical and peaceful for inspections, and felt more like he was working with the operators for safety rather than being punitive. They loved him. He got tons of swag from various airports and airlines and he enjoyed sharing these with his grandchildren. While he was there, he received an award for having given 50 years of dedicated service in Aviation Safety. Any place of business he entered, he’d see a logo shirt and say: “What’s it gonna take for me to get one of those?” then pull out his wallet. They would always give him one. He retired from there only because Mary needed extensive health care due to kidney failure. Truth be told, we all thought he would never retire and would die on an airfield somewhere.

Norman and Mary had a stormy marriage. In spite of this, he always bought her the sappiest love cards for every occasion, the more expensive and gushy the card, the better. In the early 90s they went to a Retrouvaille marriage retreat which they say, through the grace of God changed their marriage. There was no Retrouvaille Chapter in Louisville at that time, so in true Mary and Norm fashion decided to start one here. This chapter still exists and they were very proud of this. They did over 200 retreat weekends and have countless couples who attribute their resurrected marriages directly to the efforts of Norm and Mary.

Norman loved to sing in choir at church. Mary was insistent this was only because the choir ladies fawned over him. She was not wrong, but the man could sing. He loved encouraging the love of music in all his children. From 8 track tapes to Youtube links on Facebook he was always sending songs to people he hoped they would love. Norman didn’t take religion as seriously as Mary. He loved flea markets. Regularly on Sundays he would have one of his children go into church, grab a bulletin, and then proceed to go “dumpster diving.” He’d show up back at home and ceremoniously drop that bulletin on the kitchen table.

During Norman’s final years, he cared for Mary tirelessly. After Mary’s passing, he moved to Morning Pointe Assisted Living and there used his leadership skills to solve problems, encourage others, and made many friends among the residents and the staff. He particularly loved sharing Jesus pictures, prayer blankets and GoodRx discount cards. There were several opportunities for him to let them see just why he had the nickname “Stormin’ Norman” on his walker which he tells everyone he only used to carry “his stuff.”

His children, grandchildren and friends all say that he was always their supporter, always in their corner, always generous, always interested in their lives and genuinely cared. We are delighted to remind one another of some of his favorite saying:.

I just gotta play the game.

Tidying the house was “Policing up.” and meant to run around and pick up the often cluttered house because company was coming.

Off your *** and on your feet! You can’t make a living on your butt! Or, if you were in his good favor he’d say: Rise and Shine, Cookie. You’re not getting any younger.

As a kid, you know you had gone too far when he said he was going to jerk a knot in your tail. If you acted up in the backseat of the car, he would turn around and bellow, “I’m going to knock some heads together.”

Every road trip was sure to include a stop where he would pull off on the side of the road to “check the tires.”

Daughters and other beloved females were called “Cookie” and his son was called “Butch.” The smallest grandkid was always dubbed “runt” or “rat.”

And when he was mad, he’d just glare at you with his steely blue eyes and say, “Whatever.” Then you knew the discussion was over.

Every time he had one of us take him to an appointment or any car trip, when he got back to the house, he’d say: “Well, dear, we cheated death again.” And we would nod and smile.

The visitation for Norman Moore will be Saturday March 19, 10:30 to 11:30 at St. Athanasius Catholic Church in Louisville, KY, with a funeral mass following at noon.

On June 24th at 12:30 PM, his remains and those of his beloved wife, Mary Helen Kennedy Moore will interred in the Veterans’ Cemetery in Radcliff, KY. He will be honored with a 21 Gun Salute.