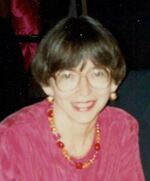 She was preceded in death by her husband of 49 years, Gary Stonecipher; parents, George and Mayme Lou Hinton of Owensboro; and brother, Wayne Hinton.

Mom wanted her obituary to read, “She was born, she lived, she died.” However, there was a little more to it. She came to Louisville to attend the University of Louisville Music School. Music was a constant in her life, and she sang with the Harvey Browne Presbyterian Church, The Louisville Singers, and the Bach Society. She retired from Macy’s but spent most of her career with Stewart’s and later Hess’s.

In lieu of flowers, please make donations to the Arts group of your choice, or support your local musicians. She loved the Louisville Leopards. Also feel free to join us in her practice of clipping and sending every article of senseless gun related deaths to Senator Mitch McConnell.

Due to COVID, there will be no service. Arrangements are being made through Highlands Funeral Home.