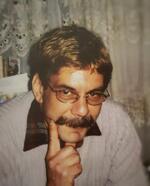 He was a proud graduate of Atherton High School (class of 1972), went on to study electrical engineering, and worked at Nixon Power Services for 20 years, among others. He was an avid Star Trek fan, as well as a Lionel train enthusiast. His favorite claim to fame was that he attended Woodstock at age 14 while visiting his uncle's nearby farm.

He was preceded in death by his parents, and his son, Patrick Ross Pulvere IV. He is survived by his wife of 40 years, Kelley Pulvere; one daughter, Erin Nachby (Richard); one son, Kevin (Martina); two grandsons, Stephen and Philip Nachby; one brother, Douglas "Doug" (Brenda); and many nieces and nephews.

His funeral Mass will be held at 11 a.m. Tuesday, April 5, at Our Lady of the Pillar, 4049 S 5th St. with interment at Calvary Cemetery. Visitation will be from 2-8 p.m. Monday, April 4, at Highlands Funeral Home.