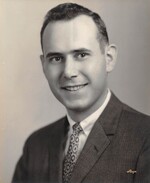 He was the son of Mrs. and Mrs. Frederick and Lodema Simon of Louisville. He attended Christ the King Grade School, Flaget High School; and Bellarmine College, of which he was a member of the pioneer graduating class.

He was in the Navy ROTC program at Bellarmine and served in the Navy after the Korean War. He was a Chemist and Quality Engineer for Cochran Aluminum, Anaconda Aluminum, ARCO and Reynolds Aluminum. He was also a member of St. Raphael the Archangel Catholic Church.

His funeral Mass will be held at 10:00 a.m. on Saturday, March 19th, at St. Raphael the Archangel Catholic Church, 2141 Lancashire Avenue, Louisville, Kentucky 40205; followed by a graveside service at Calvary Cemetery.