To share your memory on the wall of Robert Ray (Bob) Jarvis, sign in using one of the following options:

Provide comfort for the family of Robert Ray (Bob) Jarvis with a meaningful gesture of sympathy.

Growing up in Barboursville he was an active hunter, fisher, and enjoyed camping, who apparently grew up knowing what squirrel tasted like.

He was drafted into the army almost immediately after the end of the Korean War, He later confided to his middle son that the army “ruined the fun” for guns. Hunting and fishing remained perpetually behind him. Although family members recalled he was an excellent marksman.

He broke state records in track. He received his undergraduate degree from Union College in Barboursville and received a master’s degree in education from the University of Louisville 1964. Rank 1 University of Louisville 1970. Following in his Parents’ footsteps, (his father was a principal and his mother was a teacher), he was first an art teacher from 1957 to 1964, then a high school guidance counselor from 1964 to 1970, and finally an assistant principal from 1970 to 1992. He joked he had been in high school for 30+ years and still hadn’t gotten out. Several years after he retired, in 2008 he was honored by Southern High School when they inducted him into the school’s hall of fame.

After retirement he became a deacon alongside his wife at Walnut Street Baptist Church where he remained for several years.

But his real love and passion was his family. He enjoyed traveling with his wife and children on into their adulthood, and managed to visit all 48 of the continental United States and Canada. He enjoyed spending quiet evenings with his family watching a movie at home, or eating at one of several of his favorite restaurants around Louisville. He instilled in his children a love of family, God, and a moral compass to live good and productive lives.

Given the world situation with the Coronavirus, a decision was made for the safety of his family and friends to postpone a memorial service until such time as it’s safe for a group of people to gather in his honor. As the central core of his love and passion was his family, and of course his friends, we feel confident he would want us to remain safe in remembering him.

In lieu of flowers the family asks donations be made to Walnut Street Baptist Church.

He was a good man.
Read Less

To send flowers to the family or plant a tree in memory of Robert Ray (Bob) Jarvis, please visit our Heartfelt Sympathies Store.

We encourage you to share your most beloved memories of Robert Ray (Bob) Jarvis here, so that the family and other loved ones can always see it. You can upload cherished photographs, or share your favorite stories, and can even comment on those shared by others. 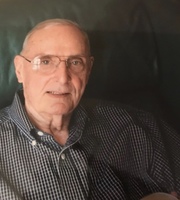