To share your memory on the wall of Shirley Franklin Hickerson, sign in using one of the following options:

Born in Louisville in 1932, Shirley was the youngest daughter of Ual G. and Jesse Domeischel Franklin. She was a graduate of Atherton High School. Shirley and Bill started dating in the 10th grade and were married on her twenty-first birthday. While raising four children, she became a Real Estate Agent with Miller Meeks and Lynch. When Shirley and Bill returned to Louisville they founded Hickerson Sales & Engineering Company where she was the Secretary/Treasurer.

It was abundantly clear in all her words and actions that Shirley was a doting mother, aunt and grandmother. She never missed a single milestone in her children and grandchildren’s lives, and was universally adored beyond her immediate family, as she was always the life of party. She loved to travel, particularly when it was to be with her family. She was an avid horse racing fan and owner. She is remembered, among other things, for her love of dogs and University of Kentucky basketball. She was a member of St. Paul United Methodist Church (Louisville).

The family would like to thank the staff at Cedarhurst in Lexington for their care of Shirley over the past year. Due to the recent visitation restrictions at Cedarhurst, Shirley was assisted in care by Kathy Needy, giving her family great peace.

To send flowers to the family or plant a tree in memory of Shirley Franklin Hickerson, please visit our Heartfelt Sympathies Store.

We encourage you to share your most beloved memories of Shirley Franklin Hickerson here, so that the family and other loved ones can always see it. You can upload cherished photographs, or share your favorite stories, and can even comment on those shared by others. 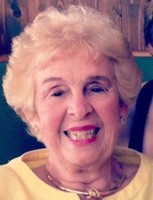