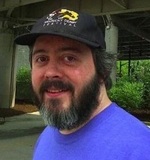 Stephen Lyons, 56, passed away on Tuesday, August 4, 2020. He was born on August 3, 1964, in Louisville, KY. He was a former computer tech at Photo-Offset, and was also a former employee of Amazon. He was an avid Jeep and off-road enthusiast.
Stephen was preceded in death by his parents, Donald and Wanda, and brothers, Luke and Paul.
He is survived by brothers, Doug (Donna), Rick (Kim), and Jim; sister, Teri; sister-in-law, Cheri; his close friend, Cherie; 13 nieces and nephews; and 8 great-nieces and nephews.
A funeral service will be held at 12:00 pm on Friday, August 7, 2020, at Highlands Funeral Home, 3331 Taylorsville Rd. Visitation will be from 9:00 am until the time of service.