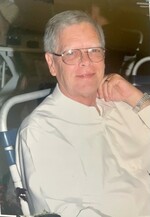 He served in the United States Marine Corps and was a Veteran of the Vietnam War. Stephen was preceded in death by his parents Rollin and Agnes Ragle and brother Tom Ragle. He is survived by his beloved wife of 53 years, Susie Burns Ragle, daughters Mary Peckenpaugh (Ryan) and Sara Ragle (Jay), and two grandsons Zane and Seth Peckenpaugh.

The family would like to thank the nurses, doctors, and staff of the VA hospital in Louisville, for their extraordinary care over the years as well as the Hosparus Team. There will be visitation Tuesday, May 3rd at Highlands Funeral Home (3331 Taylorsville Rd.) from noon to 4 PM, immediately followed by a short memorial service.

The family would prefer that in lieu of flowers, donations be made to the Kentucky Humane Society, Hosparus or KODA.