To share your memory on the wall of Virginia Harmon Flatt, sign in using one of the following options:

Bill served in the United States Army and is a Veteran of WWII, as an infantryman in the 42nd Rainbow Division, earning both the Bronze Star and Purple Heart for heroism under fire during active wartime. He was a participant in the liberation of Nazi death camps and witnessed the atrocities of communism. Bill and Virginia loved God, their country and family and instilled those values in their family.

Bill and Virginia met while working for the University of Louisville where Virginia served in the accounting department prior to their marriage. Bill, served in several key positions for the university and retired as Associate Vice-President of Finance. After they married, Virginia turned her attention to being a devoted mother, exceptional homemaker and extraordinary cook, passing her love of cooking on to their son, George.

Over the years, Bill and Virginia enjoyed membership at Woodhaven and Oxmoor Country Clubs and are members of Meadowview Presbyterian Church.

Bill and Virginia were blessed with good health and enjoyed a long retirement together filled with extensive world travel adventures and much time spent with family and friends doing the things they loved.

Their funeral service will be at 1:00pm on Saturday, March 14, 2020, at Highlands Funeral Home, 3331 Taylorsville Rd. Visitation will precede from 10:00am until the time of service. In lieu of flowers, the family asks that donations be made to Hosparus of Louisvillle at 3532 Ephraim McDowell Dr. Louisville, KY 40205.
Read Less

To send flowers to the family or plant a tree in memory of Virginia Harmon Flatt, please visit our Heartfelt Sympathies Store.

We encourage you to share your most beloved memories of Virginia Harmon Flatt here, so that the family and other loved ones can always see it. You can upload cherished photographs, or share your favorite stories, and can even comment on those shared by others.

Posted Mar 09, 2020 at 05:05pm
Thank you for raising my husband to be such a good man. You were a remarkable woman. We love you and will miss you always. Joanne 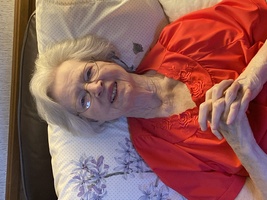