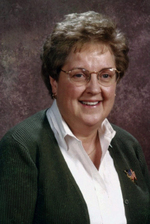 Virginia "Ginny" Gray Forman passed away on Saturday, February 12 at Baptist Health in Louisville, KY. She was born November 19, 1939 in Flemingsburg, Kentucky, though for many years she claimed to have been born in 1940, then 1941. This always puzzled her children who believe that a person who bothers to fib about her age should swing for the fences. She was born the 10th of 12 children to the late Alice Kerr Hood Gray, and Roy Cooper Gray, Sr. of Flemingsburg.

Ginny is survived by her loving husband of 58 years, George William "Bill" Forman, Sr. whom she met mixing cocktails in the smoky bleachers of Freedom Hall in 1963. Even before that fateful NCAA tournament game, she loved basketball, which served her well when Bill later coached at St. Patrick's High School in Maysville.

"Mrs. Coach," as she was known to the students of St. Pat's, Ginny volunteered at countless Fall Festivals, sponsored the cheerleading squad, and formed the girl's track team.

She was educated in Fleming County and attended the University of Kentucky to study visual art in 1959, where she joined the Delta Delta Delta sorority and later transferred to Morehead State University.

She began her long career as an educator at the Maysville Community Kindergarten and Nursery School in the late ‘60s while working toward her bachelor's degree from MSU. Upon graduation, she began teaching elementary school at St. Michael's elementary in Ripley, Ohio–a vocation she attacked with great love and passion. In 1982 she moved with her family to Louisville where she earned a master's degree in Education from UofL.

In Louisville she taught at the Holy Name and St. Margaret Mary Elementary schools before joining the faculty at Southern Middle School in 1995. After retiring in 2005, Ginny loved running into former students and was endlessly inspired to learn about the great things they achieved in their lives.

She also served as Chairperson of the Republican party of Mason County in 1980, where she became very active in the campaigns of Ronald Reagan and others. She remained politically active for much of her life and loved politics nearly as much as she loved the University of Louisville women's and men's basketball teams.

Known for her bawdy humor, and love of all kinds of mischief, Ginny courageously rode the razor's edge of inappropriate humor to the amusement and/or chagrin of her children: George W., II (Tina), Mike, Mary, and Mark (Susan Linville). She refused to be called "grand" anything and was known simply as "G.G." to her adored grandchildren George William “Will” Forman, III, Johnathan Forman, Sophie Forman, Braelen Forman, Lilly Hamlet, Finn Hamlet, Jacob Forman, and Moses Forman.

Ginny will be laid to rest in Calvary Cemetery. Visitation will be held from 4-8 p.m. Monday, February 21, 2022 at Highlands Funeral Home, 3331 Taylorsville Road. Her Funeral Mass will be celebrated at 10 a.m. Tuesday, February 22, 2022 at Epiphany Catholic Church, 914 Old Harrods Creek Road. Mass will be preceded by a visitation at 9 a.m.

The family would like to thank the wonderful caregivers in the Palliative Care Unit at Baptist Health who provided her tremendous and tender comfort in the waning hours of her life.

In lieu of flowers, the family would like to request that donations be made to Hosparus Health (https://hosparushealth.org) or to the Northeast YMCA (https://ymcalouisville.org) in memory of Ginny Forman.