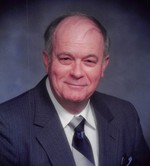 William (Bill) C. Hunt, 88, of Louisville, died May 16th, 2019, at Baptist East, surrounded by his family.
Bill was a graduate of Male High School, was a Korean War Veteran, retired from the Ford Motor Co., after 44 years, and was a member of Southeast Christian Church. He was the ultimate family-man who loved golf, spending time on Sanibel Island, and was a gifted craftsman. His greatest love was his wife, Sara, who even after 67 years of marriage, he still called his “bride”.
He was preceded in death by parents, Charles and Grace Hunt and his sister, Mildred Brotzge.
Bill is survived by his loving wife Sara; children, Angie Weir (Darl), Karen Smith (Alan), Steve Hunt (Laura), and Bill Hunt (Becky); 12 grandchildren and 14 great-grandchildren.
His funeral will be at 8:30 am, Monday, May 20th, 2019 at Highlands Funeral Home, 3331 Taylorsville Rd. with burial to follow in Resthaven Cemetery. Visitation will be on Sunday, May 19th, 2019, from 1-7pm at the funeral home.
Expression of sympathy may be made to Hosparus or Down Syndrome of Louisville.