To share your memory on the wall of William Long, sign in using one of the following options:

Provide comfort for the family of William Long with a meaningful gesture of sympathy.

Bill was extremely proud to have served his country in the Army as a Lt. Col. He loved playing cribbage, watching NASCAR races, fishing and talking about his family. It was particularly fitting that Thanksgiving was his favorite holiday since it represented his love of family gatherings, eating delicious food, and serving his world-famous oyster stuffing. He attended U.S. Military Academy at West Point, and the University of Minnesota where he received his bachelor's degree in business. He earned his MBA from Governors State University. He later graduated from the United States Army War College.

Bill will be honored at a private military funeral. In lieu of flowers, memorial donations may be made to the American Cancer Society in Louisville 1640 Lyndon Farm Ct #104, Louisville, KY, 40223.
Read Less

There are no events scheduled. You can still show your support by sending flowers directly to the family, or planting a memorial tree in memory of William Arthur Long Jr..
Plant a Tree

Posted Apr 15, 2020 at 01:02pm
Stacy, Our deepest sympathy to you and your family. Bill really cared for others. His memory will remain in our hearts. God Bless You , Mark & Jo Dee 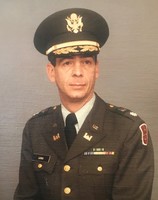