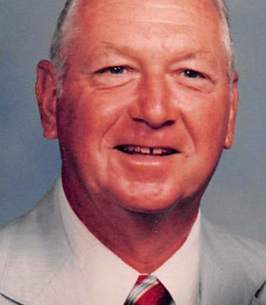 Print
William R. “Bill” Molnar entered his heavenly home Sunday, October 21, 2018 at his home surrounded by family and much love. He was born in 1926 in Pennsylvania, son of Margaret & William Molnar. He was raised in Philadelphia, attending Catholic grade school & high school. He and Florence Welsh met during high school years, and they would later become man and wife. He began college at Villanova University, then entered the Navy after his first year during World War II, serving in the service for almost two years. He then finished college, graduating 2nd in his class with a degree in electrical engineering. He was hired by General Electric, and worked in Lynn, MA and Trenton, NJ. He and Florence married after dating for eight years, and had their first child during the first year of marriage. GE then transferred him to Louisville, KY in 1953, when Appliance Park was new. He and Florence had five more children, so life was very busy for the young couple. Florence developed TB just before giving birth to their fourth child, and Bill made sure all four children had good care at home while Florence was at Waverly Hills for a year, recovering. He also helped Florence raise part time four of her brother’s children, who became orphans after both of their parents’ deaths. GE asked him to head up the World Iron Program with a three-year assignment in Sao Paulo, Brazil in the early 80’s, so Bill & Florence moved there with Mary, their youngest daughter(Mary returned to Louisville after one year). After this assignment, he & Florence returned to Louisville, and he retired shortly thereafter. Bill was an avid golfer, and thoroughly enjoyed getting out on the links when he could, winning a few trophies along the way. After retirement, he could be found three days a week at Midland Trail. But his biggest pleasure and enjoyment was his family. He was a devout family man, and was happiest when all of his children, and later, grandchildren, then great-grandchildren were around. He was a devout Catholic and member at Our Lady of Lourdes and St. Martin of Tours Catholic Churches, serving on a Parish Council, at St. Vincent de Paul soup kitchen, and for five years was a ski instructor at Paoli Peaks with Florence. He was predeceased by his parents and brother & sister-in-law, John & Mary Jane Molnar. He is survived by his loving family –Florence, daughters Peggy Parrino (Mike), Liz Knipper (Tom), Mary Dugan (Dave), and sons Bill (Debbie), Michael (Patty), and Bob, seven grandchildren and nine great-grandchildren. All of our family will miss him very much, but look forward to the day we will be reunited with him for eternity in our heavenly home. Visitation will be on Thursday, October 25 from 9-11 AM at Our Lady of Lourdes Catholic Church, 510 Breckenridge Lane, Louisville, KY 40207, with funeral to follow there at 11. Burial will follow at Calvary Cemetery. In lieu of flowers, please direct any donations to Our Lady of Lourdes for Masses to be said for William Molnar, or donate to your favorite charity.

We encourage you to share any memorable photos or stories about William. All tributes placed on and purchased through this memorial website will remain on in perpetuity for future generations.

SW
Bill was a great guy married to the best lady on the planet! I wish you all good memories and may the lord bless your heart ache and heal it with his hand!

ET
Bill had many great years! He had a lot of courage to manage his kidney issue.
Now at home in heaven.
Elaine Tillman - Tuesday October 23, 2018 via Condolence Message
Share This:
1
Page 1 of 1
Share
×