To share your memory on the wall of William Poole, sign in using one of the following options:

Bill was born on June 8, 1949 in Louisville to his parents June and Wade H. Poole Jr. Bill attended St. Albert the Great grade school. He graduated from Trinity High School in 1967 and went on to become a Petty Officer 3rd Class in the US Navy. He proudly served in Vietnam. When he returned home, he began a career as a butcher and ended his career working at the Kroger meat department in Plainview. He was diagnosed with cancer in late 2018 and put up a valiant fight for 14 months.

Bill never married. He had a number of struggles in his life of which his faith got him through. He had a long term loving relationship with his girlfriend Annette Schey. His Catholic faith was important to him as he vigilantly prayed the rosary daily and attended Sunday Mass. He loved his Kentucky Wildcats and the Notre Dame Fighting Irish.

In lieu of flowers, the family requests that expressions of sympathy be in the form of donations to The St. Vincent de Paul Society, 1022 S. Jackson Street, Louisville, KY 40203.
Read Less

To send flowers to the family or plant a tree in memory of William M. "Bill" Poole, please visit our Heartfelt Sympathies Store. 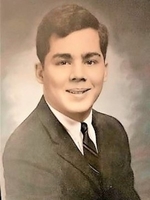