To share your memory on the wall of Gary Agnew, sign in using one of the following options:

Provide comfort for the family of Gary Agnew with a meaningful gesture of sympathy.

We encourage you to share your most beloved memories of Gary here, so that the family and other loved ones can always see it. You can upload cherished photographs, or share your favorite stories, and can even comment on those shared by others.

The Washington Customer Service Team and PlumbRight Services & Rooter, Inc. have sent flowers to the family of Gary Thomas Agnew.
Show you care by sending flowers

Posted Nov 25, 2019 at 04:07pm
Leanhart Plumbing is deeply saddened by the news of your loss. We pray that God will grant you the strength. Our most sincere condolences.
Comment Share
Share via:
TT

Posted Nov 25, 2019 at 12:21pm
Wishing you peace to bring comfort, courage to face the days ahead and loving memories to forever hold in your hearts.

Posted Nov 24, 2019 at 11:19pm
Gary had a good heart you could always count on him to be there if you where in need of something. Gary before he married Lauren use to live next to who is now my wife. He always would watch over her making sure she got in the house safely before we were married. I meet Gary on one of those occasions when he didn't know who I was and he was determined to make sure that no one was around her property that didn't belong. He wanted to know who I was and I thanked him because he cared so that he would look out for his neighbors. We became good friends and later I watched over his property before he sold it. We will miss Gary so much. Kevin & Evelyn Cecil
Comment Share
Share via:
PI 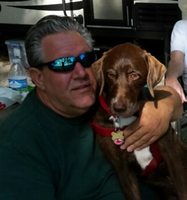