In Memory of
George Thomas (Tom) Knappenberger
1927 - 2018
Click above to light a memorial candle.
Memorial Candle Tribute From
Highlands Family Owned Funeral Home
"We are honored to provide this Book of Memories to the family."
View full message >>>
Send Flowers
Menu 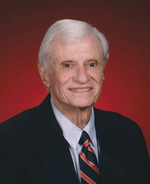 George Thomas (Tom) Knappenberger, 90, of Louisville, died Thursday, July 19, 2018, in Louisville. He was a native of Warren, Ohio. He attended the University of Virginia and graduated from Hiram College.

Tom worked for Republic Steel and Airco Carbide until his retirement. He was a longtime member of Audubon Country Club, where he served two terms as president. A lifetime golfer, he started a second career in retirement as a United States Golf Association (USGA) Certified Rules Official. Tom officiated at many USGA National Championships tournaments, including The US Senior Open, US Women's Open, US Men's and Women's Amateur and Mid-Amateur Championships. He served as Regional Affairs Director for the USGA for many years. He also officiated at many NCAA Men's and Women's Golf Championships. Tom was a Director Emeritus of the Kentucky Golf Association and one of the founding members of the Kentucky Senior Golf Association. He officiated at numerous events for the KGA, KPGA, KPGA Junior Golf Tour, the KY Junior Golf Foundation and the Kentucky State High School Golf Championships. His passion for the Rules of Golf was unparalleled and he loved teaching the rules to others - especially if you were playing with him.

He was preceded in death by his first wife of 49 years, Dianne VanHuffel Knappenberger, a daughter, Kristine Knappenberger; and his second wife, Dorothy Masterson Knappenberger.

A celebration of his life will be held at Audubon Country Club on Wednesday, July 25th from 5:00pm – 8:00pm.

Memorial gifts may go to Hosparus of Louisville (hosparushealth.org) or The First Tee (thefirsttee.org).

The family wishes to express its gratitude to Tom’s many caregivers, including Magnolia Springs Memory Care (Melissa and crew), Bluebird Homecare (Joanne and Marianne, yes, we are referring to you) and Episcopal Church Home (Alice, your compassion has no bounds).

To send flowers to the family or plant a tree in memory of George Thomas (Tom) Knappenberger, please visit our Heartfelt Sympathies Store.