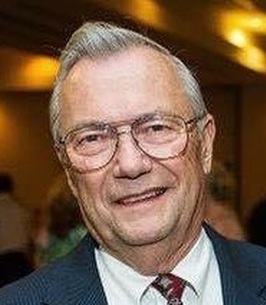 Share this tribute
Memorial Candles Lit for George Donald Lawson | SEE ALL
Light a Candle
"We are honored to provide this Book of Memories to the family."
— Highlands Family Owned Funeral Home
"61 years of friendship can never be replaced but the memories are very dear. God bless your family. ..."
— Buddy and Cindy Parker
Funeral Details Memory Wall Photos & Videos Send Flowers

Print
Don Lawson, 86, of Louisville, Kentucky died peacefully, surrounded by family, on Tuesday October 23, in Vero Beach, Florida, after a brief illness. Don was born in Barren County, Kentucky, the only child of Raymond and Jewel Lawson (MacDonald). He graduated in 1953 from Bowling Green College of Commerce with a B.Comm and in 1975 earned an M.A. from Webster College. He married Dorothy (Dot) Elizabeth Lawson (Petrie) and during their 58 years together they raised three children. He is predeceased by his parents, his wife Dot (2013), and his son Robert (Bob, 2007).
He is survived by his son Don Jr. (Janice) of Louisville, daughter Susan (Mike) of Vero Beach, four grandchildren, Allison, Bradley, Cassidy, Ethan and two great grandchildren.
Don, along with F.W. Stephens, established Stephens and Lawson CPAs in 1968. He very much enjoyed helping his clients. He retired in 2017. After retirement he remained active in real estate. He treated everyone with respect, saw the best in people, and always gave a person the benefit of the doubt. His treatment of people was a tribute to his generosity of spirit. Throughout his life he maintained a positive outlook and was determined to find joy in life in spite of the losses and hardship that anyone who lives to 86 endures. His dear friend and companion of the last five years, Nancy Young, was instrumental in his happiness and the family is grateful to her for that. The two of them enjoyed happy times and travels together.
There will be a visitation at Highlands Funeral Home, 3331 Taylorsville Road on Tuesday October 30 from 5pm to 8 pm and October 31 at 10 AM. The funeral will follow at 11:00 AM on October 31. Cremation will take place after the service.
In lieu of flowers please make a donation to a charity of your choice.

To send flowers to the family of George Donald Lawson, please visit our Heartfelt Sympathies Store.

We encourage you to share any memorable photos or stories about George. All tributes placed on and purchased through this memorial website will remain on in perpetuity for future generations.

61 years of friendship can never be replaced but the memories are very dear.
God bless your family.
Buddy and Cindy
Buddy and Cindy Parker - Wednesday October 31, 2018 via Memorial Candle
Share This:

Our prayers are with you and your family during this difficult time.
Louisville Toppers - Monday October 29, 2018 via Heartfelt Sympathies
Share This:
1
Page 1 of 1
Share
×